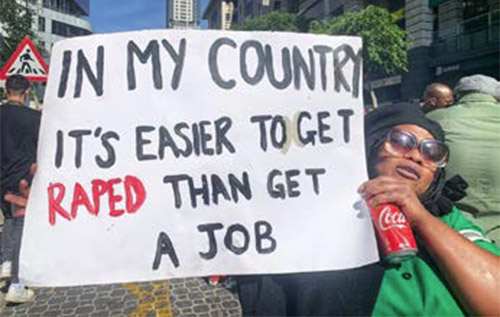 The Universal Declaration of Human Rights (UDHR), the founding document of the United Nations, states that the “recognition of the inherent dignity and of the equal and inalienable rights of all members of the human family is the foundation of freedom, justice and peace in the world.”

There is now near-universal consensus that all individuals are entitled to certain basic rights under any circumstance. Human rights are the articulation of the need for justice, tolerance, mutual respect and human dignity in all of our activity. To protect human rights is to ensure that people receive decent humane treatment. To violate the most basic rights on the other hand, is to deny individuals their fundamental moral entitlements. It is, in a sense, to treat them as if they are less than human and undeserving of respect and dignity.

Gender-based violence is a profound human rights violation, which is a common and widespread problem in South Africa, which disproportionately affects women and girls. It is a crisis that is tearing our society apart and affects every community in the country. It increases particularly during any type of emergency, whether it be an economic crisis, a breakout of conflict or a disease.

We have seen a significant increase in the number of gender-based violence cases since the country began the nationwide lockdown in response to the COVID-19 pandemic. Pre-existing social norms and inequalities, economic and social stress caused by the pandemic, coupled with restricted movement and social isolation measures, have led to an exponential increase in gender-based violence cases.

Inasmuch as gender-based violence does not begin with disasters like COVID-19, the chaos and instability this has caused have left women and girls more vulnerable than ever. The mass effort to save lives has put one vulnerable group at risk. Women and children who live with abusers have no escape. The pandemic makes it hard for this vulnerable group and being able to separate them from people who abuse them and provide them with resources that can help has been a challenge.

Publicising abuse is a way to demand justice for the victims, by pressuring governments to respond and to hold perpetrators accountable. Publicising abuse raises awareness in society and can mobilise support for the victims in making a complaint. The level of detail in the documentation can affect the ability of the supporting agencies to accept and act on a complaint and should be as comprehensive as possible. The effectiveness of human rights as a tool depends on the accuracy and comprehensiveness of the evidence gathered. It can contribute to educating and organising as well as advocating at a political or legal level.

Government leaders have been brought down through documentation of human rights violations; the power of the process, both for the victim and the perpetrator, should not be underestimated. Documentation can also be a way to secure assistance, relief and rehabilitation for victims. Documentation can help to mobilise international attention on an issue and push the government to act as a result. Accurate statistics are difficult to obtain for many reasons including the fact that most incidents of gender-based violence are not reported. It is however evident that our country has particularly high rates of gender-based violence. This is more so when the media brings attention to some of the more heinous acts of violence against women.

One of the most devastating cases which left the whole country in shock was that of 21 year-old Tshegofatsho Pule who was eight months pregnant. She was found hanging from a tree in Roodepoort, Johannesburg with multiple stab wounds to the chest. Another case was in Khayelitsha, which is one of the biggest townships in Cape Town, where 34 year old Sbongiseni Gabadu’s decomposing body was found chopped up and stuffed inside a sports bag.

Documentation can be an empowering process if it involves sharing ownership of information with the affected group, and helps them understand the political, economic or other circumstances that allow violations to happen. Often, victims of rights violations who belong to a highly stigmatised or persecuted group do not recognise that a rights violation has happened to them or that certain treatment is wrong. Some do not believe they have any rights at all. In addition to providing a historical record of abuse, community or peer driven documentation brings ordinary people into a broader movement against injustice.

The Constitution states that the fundamental rights of all South Africans will be respected and protected. President Cyril Ramaphosa, in an address to the country, highlighted the fact that gender-based violence should be considered as a second pandemic in the country and taken as seriously as the coronavirus. This has not been the first time that there has been a rapid surge in incidents of gender-based violence during a lockdown situation. The President reiterated the need to treat the fight against gender-based violence as a war and women’s rights campaigners have welcomed the greater focus on violence against women.