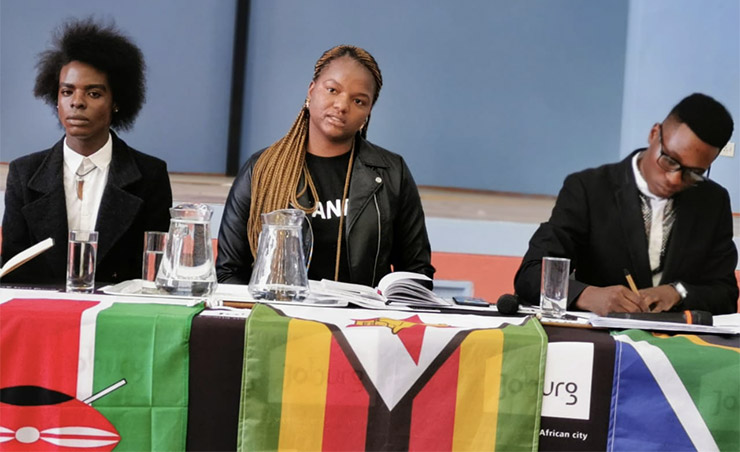 As an organisation that works to protect and promote the rights of refugees, migrants and asylum seekers, ProBono.Org was invited to join a coalition of civil society organisations in planning events to celebrate Africa Day.

Given the recent xenophobic rhetoric from leaders across the political spectrum and the resultant violence it instigated, the coalition decided it was important to unite people around the hashtags ‘#AfricaForAll and #IAmAnAfrican’. The events were intended to engage with various stakeholders to address the causes of afro-phobia in South African society and the lack of government accountability when said phobia leads to violence and death. More importantly the events were intended to provide a space for open and honest dialogue that would breed common understanding among a divergent group of people.

Youth Engagement at the University of Pretoria

This engagement with international students at the University of Pretoria was intended to get an understanding of what it is like to be a young foreign national living, working and studying in South Africa. The turnout was overwhelming and the engagements thought provoking. Issues of language barriers, tribalism and stereotyping were highlighted as key concerns among the youth population. ProBono.Org organised, catered for and moderated the event.

This dialogue, held in the heart of Soweto, brought a message of understanding and inclusiveness to the Diepkloof community. The event created a platform for three brilliant speakers from the refugee, migrant and asylum seeker community to share their experiences with Diepkloof residents. The ensuing dialogue brought out strong emotions from both the residents and the speakers. The raw emotions expressed, rather than being divisive, actually allowed for an open and honest interaction which led to a deepened understanding of one another. ProBono.Org assisted in organising and moderating the event

For media coverage on the Youth Dialogue follow the link below:
https://sowetourban.co.za/59194/ diepkloof-residents-given-insightsimmigration/

This dialogue provided a platform for professionals who work to protect and promote the rights of refugees, migrants and asylum seekers to speak about their work and highlight the challenges facing this community. The event also allowed for government officials to respond to the criticisms laid against them by the professional group. This high level engagement created an opportunity for interaction and potential collaboration between civil society and government officials working in the space. ProBono.Org assisted in planning and formed part of the panel of civil society speakers. Tshenolo Masha, the head of the Refugee and Immigration department at ProBono.Org, spoke on the legal perspectives of the migrant experience.

After all the serious discussions mentioned above the coalition decided to create a more celebratory atmosphere with a festival held in the middle of Johannesburg. This event brought together people from 20 different African countries to share food, fashion and music. The programme included live musical performances, a fashion show and various other activities for the whole family. ProBono.Org assisted with financial and logistical support.

The Foundation for Human Rights (FHR), The Consortium for Refugees and Migrants in SA (CoRMSA), Constitution Hill, Amnesty International, Lawyers for Human Rights (LHR), The Centre for the Study of Violence and Reconciliation (CSVR), Africa Diaspora Forum (ADF), The Jesuit Refugee Service (JRS), The Refugee Children’s Project, The SA Congress of Non profit Organisations (SACONO), the City of Johannesburg, the Department of Arts and Culture, the Department of Justice and the Action Support Centre (ASC).