The Asylum Seeker and Refugee application process through the eyes of a ProBono.Org employee 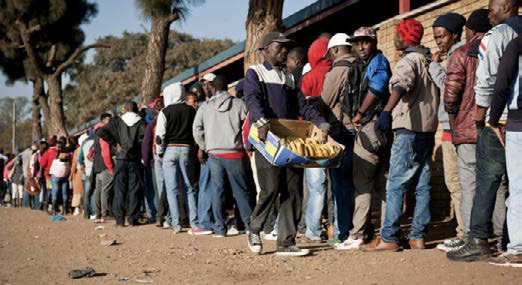 Fleeing one’s country of origin due to persecution because of gender, race, political, religion or sexual orientation is both mentally and emotionally traumatic. This is a reality that has plagued numerous foreign nationals who flee their homes. They are forced to seek refuge in a foreign country because they do not receive the protection from their government that we so easily enjoy in our country.

South Africa is known to be one of the African countries that receive a number of refugees. The South African refugee policy allows for refugees to settle freely in any area of the country, where they are allowed to work and study without restrictions. The process of obtaining refugee status, however, is a lengthy one that requires an asylum seeker to go through interviews with the Department of Home Affairs’ (DHA) officers, known as Refugee Status Determination Officers (RSDOs).

The RSDO’s duty is to determine whether an individual applying for asylum qualifies to receive refugee status. This decision is not always made immediately, therefore the asylum seeker is given a temporary permit called an asylum seeker permit, in terms of Section 22 of the Refugee Act. In the almost nine years that I have been at ProBono.Org, I’ve learnt that the application process is intimidating for someone seeking asylum.

Oftentimes, the person applying for asylum is unable to speak for themselves during the interviews and must rely on the assistance of interpreters provided by the DHA when explaining their reasons for fleeing their country of origin. It is not uncommon to find asylum seekers complain about the fact that their stories were lost in translation as interpreters rarely tell their full story correctly.

This has caused many asylum seekers to be rejected from receiving asylum in South Africa. The policy on refugee law looks good on paper but unfortunately the reality is completely different. From my experience at ProBono. Org, a number of asylum seekers who entered South Africa over three to five years ago have not yet received their decisions from the DHA. This means that an asylum seeker has to go to the DHA to renew their asylum seeker permit every three to six months or, if they are fortunate, every year.

In the meantime, the individual begins to build a life in this country such as by studying, marrying, having children, and even starting a business. The common challenge asylum seekers face is the constant fear of uncertainty about their future in this country. Usually when an asylum seeker is rejected by the RSDO for their application being unfounded, the individual is given about thirty days to appeal the decision.

If the courts agree with the RAB then the asylum seeker is given less than a month to leave the country voluntarily or be deported. This system has been failing many who have built lives in the country and are suddenly expected to leave in a matter of a few weeks. Some have children who were born in the country, and some have families they have made with SA citizens. The system does not take that into consideration.

With this in mind, one can imagine that there is great resistance from someone to up and leave the country that they have made their home. When a rejected asylum seeker fails to leave the country voluntarily, they are taken by the South African Police Services to a deportation centre known as Lindela. Lindela (translated means “Waiting”) is a detention centre for undocumented migrants in South Africa, based in Krugersdorp.

The centre detains migrants awaiting deportation and others awaiting the outcome of their application to enter the country. One can only imagine the number of migrants that are kept in this centre… migrants from different parts of the African continent. The process of deportation is not always immediate; the individual being deported can stay in the centre for months waiting to be sent back to the country they once fled.

The centre has had much controversy around overcrowding in the waiting cells and the mistreatment of migrants. Recently, the centre caught the attention of the media when a 26year old woman died there. Aline Mauwa was a mother of three who lost her life while waiting to be allowed into the country.

According to an online article on “Groundup”, her death was due to hypertension. Although she sought help from nurses at the facility, she was not assisted, and she died. Mauwa’s story is one of many individuals who have suffered under the failure of our refugee system to provide protection to asylum seekers.

The question then is – what has our government done to transform this situation? Our refugee law promises liberation and solace for those who need it. However, the implications of these policies have failed many migrants who enter our country hoping for a better future for themselves and their loved ones.