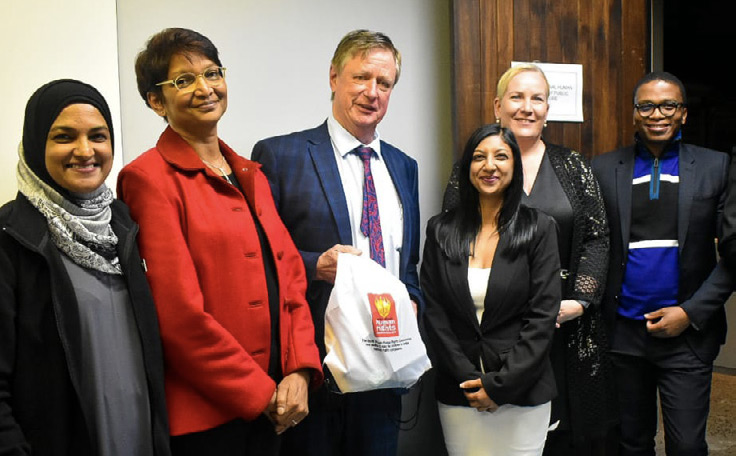 It was a dark and stormy afternoon in December 2019 when a number of legal practitioners and public interest law advocates gathered for a public lecture commemorating International Human Rights Day. Despite the load shedding and the storm wreaking havoc in Durban on 10 December, we were able to proceed with this event, and what a worthwhile event it was – with esteemed speakers Judge Johann van der Westhuizen and Advocate Andrea Gabriel SC and Advocate Zak Suleman directing the programme.

Advocate Gabriel was instrumental in the first African translation of the Universal Declaration of Human Rights. She spoke about her days visiting schools and speaking to children about examples of treating each other in a cruel way. Students were then asked to draw a picture depicting something cruel happening to another person. This illustrated the value and concept of pictorial literacy within the rural community. Each person who attended received a
copy of the SA Constitution, as well as a
notebook and pen from LexisNexis SA

Judge van der Westhuizen, former Constitutional Court Judge and outgoing Judge of the JICS (Judicial Inspectorate of Correctional Services) was wonderfully entertaining, informative and a consummate speaker. He spoke about watching the planned execution of a convicted criminal on death row internationally and the inhumanity of this process. He also spoke about the number of people who have been wrongfully imprisoned, sometimes for 20-25 years. He stated that it is not just in the interests of the convicted but also the victim that the correct person be imprisoned, so as not to perpetuate human rights violations. ProBono.Org (Durban) once again partnered with the SA Human Rights Commission and The Department of Justice and Constitutional Development to host this event, with the IIE’s Varsity College joining us as well. We extend our gratitude to the sponsors who supported the event – LexisNexis SA, Origin Water and Virgin Active | Collection.