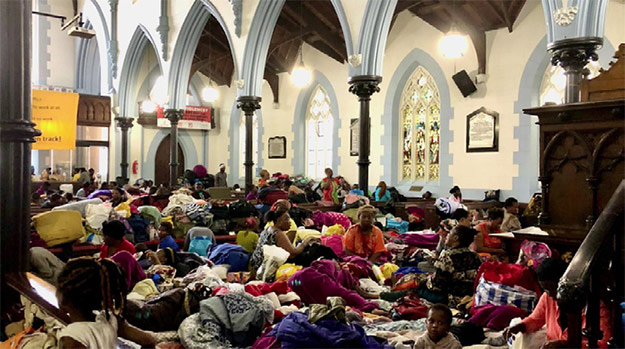 On 8 October 2019, a group of refugees commenced a sit-in protest at the Cape Town offices of the United Nations High Commission for Refugees (UNHCR) following a wave of xenophobic attacks on foreign nationals across the country. The group, which include about 624 men, women and children and 65 undocumented refugees, alleges that they are being persecuted in South Africa by a community insensitive to their plight as refugees and therefore are living in fear for their lives on a daily basis. Their demand to the UNHCR was to be relocated to a third country, which is not South Africa or their country of origin since, in both, they feared persecution. The UNHCR could not guarantee such a demand, citing international law on refugees, as well as their operational guidelines. Since no agreement could be reached concerning relocation, the City Council proceeded to forcibly evict them from the UNHCR premises, and an ugly scene of violence erupted, resulting in the Reverend Allan Storey of the Central Methodist Church offering them temporary shelter until their plight was addressed.

Until recently, the refugees have been staying in the Central Methodist Church right in the heart of the Cape Town CBD. The conditions of their stay there became a concern, with reports of violence between factions of refugees, poor sanitary conditions, health scares and fire risks owing to overcrowding.

The conditions were clearly degrading to say the least. This prompted the City of Cape Town to seek an order from the Western Cape High Court to enforce Municipal Regulations with regard to the occupation of the church by the protesters. Court hearings were also scenes of violence between the police and the protesters. The court ruled that the City has to ensure that the protesters’ human rights are protected before any penalties for infringing by-laws could be enforced. At the end of it all, it was a battle between the City to enforce by-laws by evicting the refugees, and the refugees resisting eviction until they were moved to another country that is not South Africa or their country of origin.

To many ordinary people who witnessed the debacle unfold, the refugees were the victims and the South African government, its agencies and the UNHCR were being insensitive to their plight. In the eyes of an innocent bystander, they were caught between a rock and a hard place; either to return to their communities in Cape Town and face persecution, or remain in the CBD facing running battles with the police. Some wondered why the UNHCR is not relocating them to a third country, which appeared to be the only logical thing to do to settle this crisis. But what does the law say?

Refugees are governed by International Law and the laws of the receiving country – in this case, South Africa. Generally, when a country receives a refugee, it is not at liberty in law to return that person to a country that they are fleeing from, by operation of the principle of non-refoulement. In the event that such a person returns to the country from which they fled, their refugee status is automatically revoked. Where a refugee is facing persecution in the country they fled to, two options are available; either they are returned to their country of origin or relocated to a third country. However, relocating them to a third country requires (a) individual determination of each case to determine the circumstances of the persecution and whether they warrant relocation, and (b) the availability of a third country that is willing to receive the refugees. In the present case, neither requirement has been met. The refugees are not willing to have each case be decided on its own merit and secondly, there is no country which has shown willingness to welcome the refugees. The refugees too are refusing to go back to their country of origin. Under such circumstances, there is nothing that the South African government or the UNHCR can do about the situation. A solution can only be found through the cooperation of the refugees, which has not been forthcoming owing to factional fights, and the availability of a third country willing to receive the refugees and settle them within their territory.